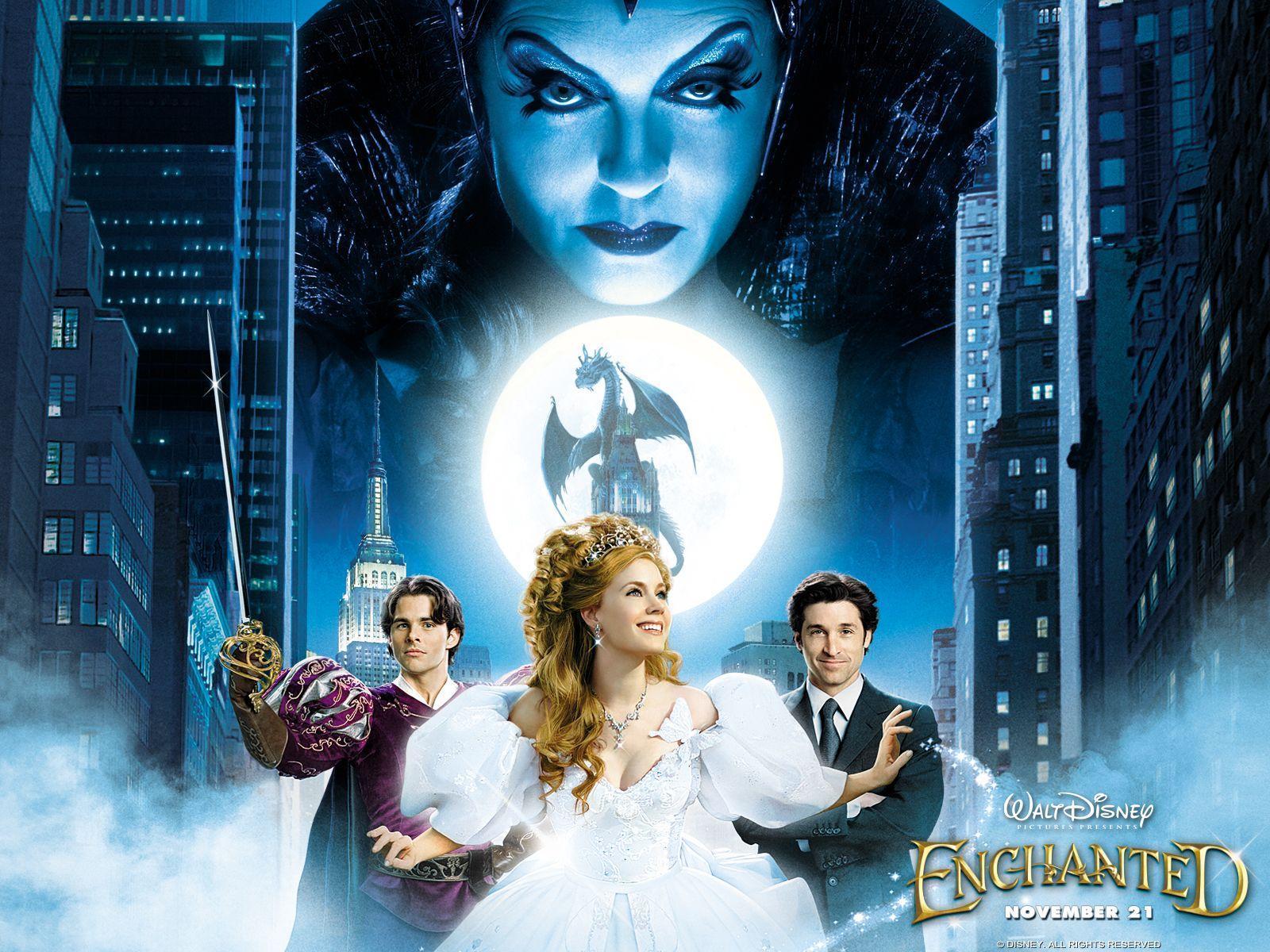 The film is both an homage to, and a self-parody of, conventional Walt Disney Animated Classics, making numerous references to Disney’s past and future works through the combination of live-action film-making, traditional animation and computer-generated imagery. It heralds the return of traditional animation to a Disney feature film after the company’s decision to move entirely to computer animation in 2004. Composer Alan Menken and lyricist Stephen Schwartz, who had written songs for previous Disney films, produced the songs of Enchanted, with Menken also composing its score (source: wikipedia).

Once upon a time in the kingdom of Andalasia, a beautiful young maiden named Giselle lives in a cottage in the forest. But before she can marry the dashing Prince Edward, Giselle is sent tumbling down a magical well – and finds herself in the non-animated, extremely disenchanted world of modern-day New York City. There, she befriends a cynical divorce lawyer, Robert, who isn’t so sure that her prince is coming to rescue her. Giselle’s spontaneous singing and fairy-tale demeanor enchant everyone around her as she waits for Prince Edward. But she’s about to discover that love in the real world isn’t always as easy as sharing a single True Love’s Kiss – and that she’ll need courage, spunk and maybe just a little enchantment if she’s ever going to find her own happily-ever-after (source: IMDb) Legend is a 1985 British-American fantasy adventure film directed by Ridley Scott and starring Tom Cruise, Mia Sara, Tim Curry, David Bennent, Alice Playten, Billy Barty, Cork Hubbert, and Annabelle Lanyon. It is a darker fairy tale and has been described as a return to more original, sometimes disturbing, fables, from the oral tradition of ancient times before reading and writing were widespread. Since its premiere and the subsequent release of the Director’s Cut edition, the film has become a cult classic. (source: wikipedia)

A magical adventure which features elves, demons and other mythical creatures. Darkness, the personification of evil, plans to disperse eternal night in the land where this story takes place, by killing every unicorn in the world. Although he looks unbeatable, Jack and his friends are disposed to do everything to save the world and princess Lili (who Darkness intends to make his wife) from the hands of this evil monster. (source: IMDb) Captain Etienne Navarre is a man on whose shoulders lie a cruel curse. Punished for loving each other, Navarre must become a wolf by night whilst his lover, Lady Isabeau, takes the form of a hawk by day. Together, with the thief Philippe Gaston, they must try to overthrow the corrupt Bishop and in doing so break the spell. (source: IMDb) Willow is a 1988 American fantasy film directed by Ron Howard, produced and with a story by George Lucas, and starring Warwick Davis, Val Kilmer, Joanne Whalley, Jean Marsh, and Billy Barty. Davis plays the eponymous lead character and hero: a reluctant farmer who plays a critical role in protecting a special baby from a tyrannical queen in a sword and sorcery setting. Industrial Light & Magic created the visual effects sequences, which led to a revolutionary breakthrough with digital morphing technology. Willow was released in 1988 to mixed reviews from critics, but was a modest financial success and received two Academy Award nominations.

A baby girl is discovered in a river by Ranon and Mims, the children of Willow Ufgood, a dwarf farmer and magician and the baby girl is taken into the care of Willow’s family. But when a terrifying dog-like creature attacks Willow’s village, whilst tracking down the baby. Willow consults the village council and the wizard The High Aldwin. The High Aldwin gives Willow a task and Willow leaves the village and embarks on the task to give the baby girl to a responsible person. But Willow soon learns the baby is Elora Danan, the baby girl destined to bring about the downfall of the evil sorceress Queen Bavmorda. Joined by his allies: swordsman Madmartigan, sorceress Fin Raziel and the Brownies Franjean and Rool, Willow takes it upon himself to protect Elora from Queen Bavmorda, who intends to kill Elora and prevent Elora from fulfilling her destiny (source: IMDb). The NeverEnding Story (German: Die unendliche Geschichte) is a 1984 West German epic fantasy film based on the novel of the same name written by Michael Ende about a boy who reads a magical library book that tells a story of a young warrior whose task is to stop a dark storm called the Nothing from engulfing the fantasy world. The film was directed and co-written by Wolfgang Petersen (his first English-language film) and starred Barret Oliver, Noah Hathaway, Tami Stronach, Moses Gunn, Thomas Hill; and Alan Oppenheimer as the voices of both Falkor and Gmork. At the time of its release, it was the most expensive film produced outside the USA or the USSR. The film was later followed by two sequels. The novel’s author, Michael Ende, felt that this adaptation’s content deviated so far from his book that he requested they either halt production or change the name; when they did neither, he sued them and subsequently lost the case. The film only adapts the first half of the book, and consequently does not convey the message of the title as it was portrayed in the novel. The second half of the book would subsequently be used as the rough basis for the second film, The NeverEnding Story II: The Next Chapter. The third film, The NeverEnding Story III: Escape From Fantasia, features a completely original plot (source: wikipedia).

Bastian is a young boy who lives a dreary life being tormented by school bullies. On one such occasion he escapes into a book shop where the old proprieter reveals an ancient story-book to him, which he is warned can be dangerous. Shortly after, he “borrows” the book and begins to read it in the school attic where he is drawn into the mythical land of Fantasia, which desperately needs a hero to save it from destruction (source: IMDb).