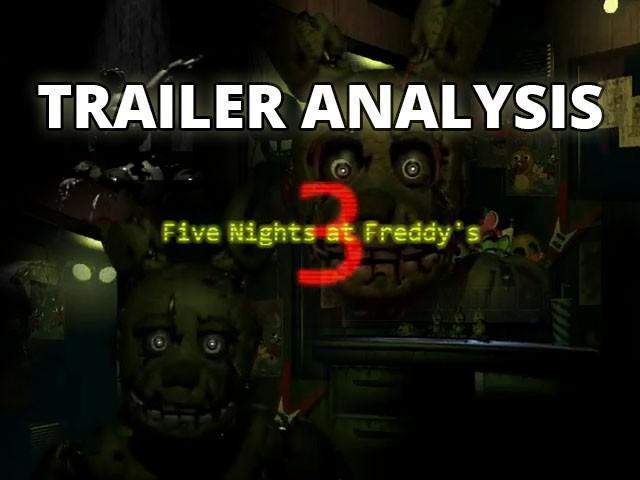 The first trailer for Five Nights at Freddy’s 3 has been released and there is rampant speculation regarding the trailer and what it all means. Well, we the Nerdipop Trailer Analysis team – is on the case.

Synopsis: Thirty years after Freddy Fazbear’s Pizza closed its doors, the events that took place there have become nothing more than a rumour and a childhood memory, but the owners of “Fazbear’s Fright: The Horror Attraction” are determined to revive the legend and make the experience as authentic as possible for patrons. They go through great lengths to find anything that might have survived decades of neglect and ruin.

At first there were only empty shells, a hand, a hook, an old paper-plate doll, but then a remarkable discovery was made…

The attraction now has one animatronic.

The trailer opens with view of the walls of Fazbear’s Fright, pictures of old drawings from when Freddy’s Fazbear Pizza was still running. Lots of happy pictures of all the old mascots line the wall – some of Freddy, Bonnie and Chica. The screen cuts to black saying: “He will come back”. Another part it cuts back to he always does. We have a place for him. Five Nights at Freddy’s 3. The question is – who is ‘him’? Some have speculated that it might be Bonnie as the remaining animatronic does look like a golden Bonnie. But I suspect it’s might be much simpler than that. Him refers to the player or phone guy. How “phone guy” can be alive – I honestly don’t know – but I suspect it’s either the player or phone guy. There is also a scene where Bonnie turns his eye to the camera next to the Freddy and Chica animatronics. The old and weather beaten animatronic does look quite a bit like Bonnie. A Golden Bonnie in the game? Who knows. The room the player is in looks like there is a security window and the usual fan and a bucket full of heads of the previous animatronics. There are also three little statues of Bonnie, Freddy and Chica on the table. The trailer ends with the remaining animatronic coming for the player. It does look like Bonnie – who after 30 years – must have lost all his colour.

So from the trailer we can gather the following:

For those of you that don’t know the Five Nights at Freddy’s franchise, some background:

Five Nights at Freddy’s is a 2014 indie point-and-click survival horror video game developed by Scott Cawthon. The game centers on the fictional pizza restaurant Freddy Fazbear’s Pizza, where the player must act as a night security guard, defending themselves from the malfunctioning animatronic animal characters by tracking their movement through the facility using security cameras.

The game was praised by critics for being a unique take on the survival horror genre, with a particular emphasis on its simplistic design, along with how its gameplay mechanics and aesthetics contributed to an overall feeling of fear and paranoia. Five Nights at Freddy’s was the top-selling game on Desura for the week ending August 18, 2014, and the game became the subject of a number of popular “Let’s Play” videos on YouTube. The game’s sequel, Five Nights at Freddy’s 2, was released on November 11, 2014.(source: wikipedia)

A South African Whovian’s perspective on Doctor Who Season 8